curated by One Moore Book

The Africa Center is excited to be hosting a free Summer Reading Series for children! Join us each Friday morning for the first four weeks in August 2019.
Curated by One Moore Book, the series features writers from the African continent and the broader African diaspora. It aims to provide children a forum in which they can see themselves reflected in the books they read, and through which they are exposed to writers of African descent.

We’ll be reading books, playing games and taking part in a range of interactive activities that will highlight cultures from various countries including Haiti, Brazil, Liberia and Burkina Faso.

This series is best suited for children 5-8 years old but all are welcome!

Details about each program and how to sign up are below.

Fabiola Can Count and Fabiola Goes to School

Written by Katia D. Ulysse and illustrated by Kula Moore Fabiola Can Count is a counting book about a young restavek girl. A restavek is a child from Haiti’s countryside who is sent by their parents to work for a wealthier family, with the expectation that the child will be educated and cared for. Unfortunately, all restavek children do not get the education or care they deserve. Join author Katia D. Ulysse for a special reading of Fabiola Can Count and its sequel Fabiola Goes to School. Following the reading all participants will be invited to take part in a Kreyol lesson.

KATIA D. ULYSSE is a fiction writer born in Haiti. Her short stories, essays, and Pushcart Prize–nominated poetry appear in numerous literary journals and anthologies, including: The Caribbean Writer, Smartish Pace, Phoebe, Meridians: feminism, race, transnationalism; Mozayik, The Butterfly’s Way: Voices from the Haitian Dyaspora in the United States, and Haiti Noir. She has taught in Baltimore public schools for over ten years, and served as Goucher College’s Spring 2017 Kratz Writer in Residence. Drifting, a collection of short stories, drew high praise from literary critics. She is currently at work on another short story collection. Mouths Don’t Speak is her latest novel.

In Monrovia, The River Visits the Sea

Written by Patricia Jabbeh Wesley and illustrated by Kula Moore In this book Wesley poetically explores Liberia’s Mesurado River through the relationship of two siblings—Klon and Geede. Join author Patricia Jabbeh Wesley for a special reading of In Monrovia, The River Visits The Sea. Following the reading all participants will be invited to take part in an art activity.

PATRICIA JABBEH WESLEY was born in Monrovia, Liberia. In 1991, she immigrated with her family to southern Michigan to escape the Liberian civil war. Wesley earned a BA from the University of Liberia, an MS from Indiana University, and a PhD from Western Michigan University. The author of several collections of poetry, including Where the Road Turns (2010), The River Is Rising (2007), Crab Orchard Series in Poetry winner— Becoming Ebony (2003), and Before the Palm Could Bloom: Poems of Africa (1998). Her poems have also been featured in former US Poet Laureate Ted Kooser’s syndicated newspaper column, “American Life in Poetry.” Additional honors she has received include the Victor E. Ward Foundation Crystal Award for Contributions to Liberian Literature, an Irving S. Gilmore Emerging Artist Grant from the Kalamazoo Foundation, an Art Fund Individual Artist Grant from the Arts Council of Greater Kalamazoo, and a World Bank Fellowship. She lives with her family in west-central Pennsylvania and has taught at Pennsylvania State University and Indiana University of Pennsylvania.

Written by Carlos de Oliveira and illustrated by Regina Pinto de Oliveira Azul is a smart and beautiful Afro-Brazilian girl who loves exploring Rio De Janeiro with her best friend, Carioca. The two meet a boy from New York named Sam and take him on an adventure to see all that Brazil has to offer. Join author Carlos de Oliveira for a special reading of Azul Meets New York Sam. Following the reading all participants will be invited to enjoy using instruments that showcase Afro-Brazilian music traditions as well as a coloring activity.

CARLOS DE OLIVEIRA, also known as Caco, is a writer, music producer, and a multi percussionist. Born and raised in Rio de Janeiro, he has mastered the drums and rhythms of Brazil, Cuba and West Africa and has dedicated himself to education, community organizing, and the promotion of Brazil through Samba. Caco has performed Brazilian music, and taught samba classes and workshops in venues such as the American Museum of Natural History, Brooklyn Museum, Lincoln Center Out of Doors, Westchester Community College, Kingsboro Community College, SOBs, Cipriani, Sista’s Place, B.B.King Club, DROM, to name a few. De Oliveira is the Founder, President and CEO of the Brazilian Council on Samba, Inc. and has dedicated part of his time to educating children and writing children’s book. He has written Azul Meets New York Sam which was published by One Moore Book and Azul Likes Samba and Carnival which is forthcoming.

Written by Georgie Badiel Liberty and illustrated by Oksana Kupriienko Water Is Here the story of Princess GieGie who is from a small village in Burkina Faso and has the task of walking for miles every morning to fetch water for her family. Determined to find a better way, she devises a plan to change her community for the better. The book takes readers on an inspiring journey as this kind-hearted princess works to make her dreams come true. Join author Georgie Badiel Liberty for a special reading of Water is Here. Following the reading all participants will be invited to take part in a drawing activity and others related to the geography of West Africa.

GEORGIE BADIEL LIBERTY is a Burkinabé model, author, and activist living and working in New York City. Named Miss Burkina Faso 2003 and Miss Africa 2004, Badiel  is a true citizen of the world. She loves working in fashion as a model but her passion lies in being an activist for people in need and the planet. As a young girl, Badiel used to walk for three hours every day to fetch water. In 2015 she founded the Georgie Badiel Foundation which is committed to building, restoring and maintaining wells, and providing sanitation facilities in Burkina Faso and neighboring countries. Through its work, the foundation, enables millions of women and children to focus on getting an education and contribute to their communities rather than spend the majority of their time traveling long-distances to fetch water.

The Africa Center10 hours ago

View on Facebook
TheAfricaCenter @TheAfricaCenter
4 hours ago
Congrats to Ethiopian-American novelist @MaazaMengiste for being long-listed in this year's #2020BookerPrize! #TheShadowKing is a historical novel exploring what it means to be a woman at war. We were thrilled to host Maaza's book launch at The Africa Center last October. https://t.co/HS3AYfcLWU
View on Twitter 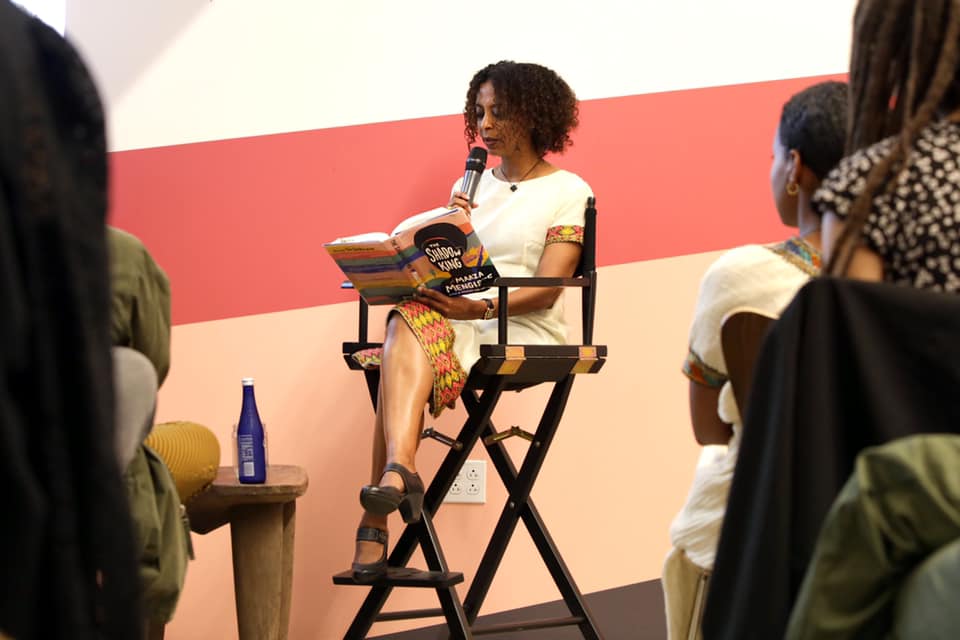