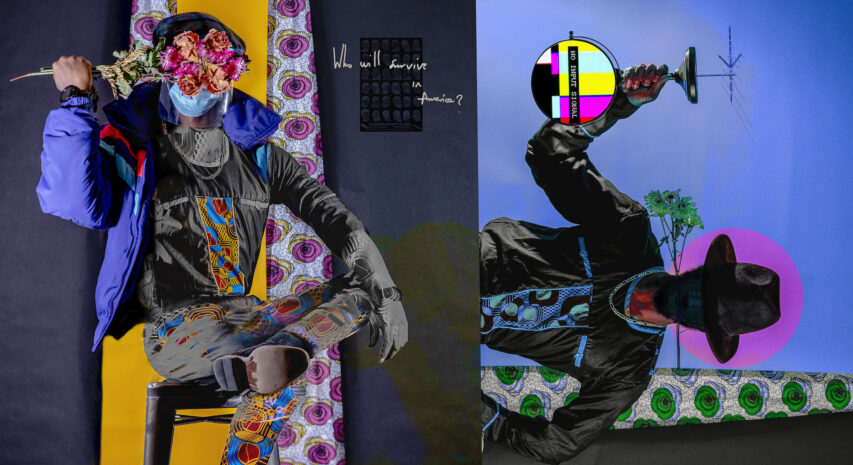 Advanced registration is encouraged. Admission to the exhibition is free for all ages.

You are invited to visit States of Becoming free of payment and can also choose to make a donation to The Africa Center upon entry.

States of Becoming examines the dynamic forces of relocation, resettling, and assimilation that shape the artistic practices of a group of 17 contemporary African artists who have lived and worked in the United States within the last three decades, and informs the discourse on identity construction within the African Diaspora. The concept for States of Becoming evolved from curator Fitsum Shebeshe’s lived experience following his 2016 move from Addis Ababa, Ethiopia to Baltimore, Maryland and his subsequent firsthand knowledge of the weight of cultural assimilation. Confronted with a different society, Shebeshe encountered a wide range of existential questions that shaped his relationship to institutions and culture. Shebeshe also had the realization for the first time that he was viewed as belonging to a minority because of the color of his skin, and a newfound awareness of the profound impact the traditional and conservative culture he grew up with in Ethiopia had on his personal sense of individuality.

Having found kinship among cultural practitioners from the African Diaspora who shared his experience, Shebeshe has united 17 artists with States of Becoming who either came to the United States over the past thirty years or who are first-generation born. The artists represented in States of Becoming relocated from twelve countries in Africa and one in the Caribbean–Ethiopia, Ghana, Ivory Coast, Kenya, Liberia, Mauritania, Nigeria, Senegal, Sierra Leone, Sudan, Trinidad and Tobago, Tunisia, and Zimbabwe–with roots in cities across the U.S., including New York, Washington, D.C., New Haven, Detroit, and Los Angeles.

Like Shebeshe, each artist in the exhibition has had a unique relationship to the U.S. context, which is reflected in their work. States of Becoming explores these artists’ perpetual process of identifying, redefining, and becoming themselves in both local and global contexts, opening up perspectives into multiple states both geographic and emotional in a constant flux of social and cultural adaptations. The exhibition presents work across mediums including painting, photography, sculpture, installation, and video, that express the many different ways in which identity is remade and reimagined. For instance, Nontsikelelo Mutiti looks to hair braiding salons of the African Diaspora, and Amare Selfu moves from figuration to abstraction to express transformation as a result of relocation. These distinct experiences produce a sense of hybrid culture emerging out of real and imagined genealogies of cultural, racial, national, and geographic belonging.

States of Becoming is a traveling exhibition curated by Fitsum Shebeshe and produced by Independent Curators International (ICI), New York. Lead funding is provided by the Hartfield Foundation as part of an initiative to support ICI’s commitment to new curatorial voices who will shape the future of the field, and ICI’s Curatorial Intensive alumni as they move through the stages of their career. States of Becoming is made possible with the generous support of ICI’s Board of Trustees and International Forum. Crozier Fine Arts is the Preferred Art Logistics Partner. The presentation at The Africa Center is made possible with support generously provided by The Africa Center’s Board of Trustees and patrons.