Curated by Dr. Jessica B. Harris—Widely Considered the World’s Preeminent Expert on the Foods of the African Diaspora—the Exhibition Reveals the Stories of Innovators, Cooks, Mixologists, and Entrepreneurs as it Emphasizes that African American Food Is American Food (Purchase Tickets)

* An Immersive Experience of the Ebony Magazine Test Kitchen, an Iconic Historical Artifact that Served as a Source of Inspiration and 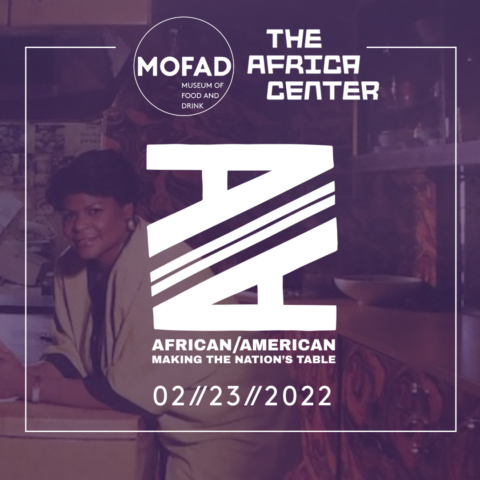 Preservation  for Generations of African Americans, Newly Refurbished and Accessible to the Public for the First Time, with Music Curated by Kelis

* The Legacy Quilt, Composed of 406 Blocks Sewn into a Vast Representation of African American Contributions to the Fabric of American Cuisine

* A Dynamic Digital Interactive Feature that Replicates a Dinner Table, Allowing Users to Unlock Stories about Migration, Movement, Cultural Evolution, and the Feeling of Sharing a Meal with Friends and Family

Thanks to the Generous Support of Judy Gibbons and Francesco Scattone and Turner Construction Company, MOFAD is Offering a Free Community Membership, Providing Free Access to the Exhibition for Residents Living in the Six ZIP Codes Surrounding The Africa Center

The Museum of Food and Drink (MOFAD) presents African/American: Making the Nation’s Table, February 23–June 19, 2022, beginning three weeks later than  previously announced due to the recent surge in COVID-19 cases. Tickets will go on sale to the public on Wednesday, January 26th at www.mofad.org. Displayed within the newly-constructed home of partner The Africa Center at Aliko Dangote Hall (1280 5th Avenue, New York), the first-of-its-kind exhibition celebrates the countless contributions of Black chefs, farmers, and food and drink producers who have laid the foundation for American food culture — recognition that is long overdue. Understanding the rich and expansive stories underlying any good meal, African/American seeks, in its immersiveness and historic scope, to offer a portrait of the immense breadth of African American traditions and innovations in cooking.

With African/American, arriving after a two-year postponement due to the pandemic, MOFAD expands on nearly a decade of making the case, in a museum setting, for culinary history’s centrality in our social and cultural life. ​​Since 2013, MOFAD has brought to the public large-scale, engaging, and educational explorations of breakfast cereal, the flavor industry, Chinese American restaurants, and more. Spanning four centuries, African/American: Making the Nation’s Table’s immersive approach to the abundance these histories contain expands MOFAD’s vision of food as a powerful lens for understanding ourselves, each other, and the world around us.

Dr. Jessica B. Harris—the acclaimed culinary historian and author whose book High on the Hog: A Culinary Journey from Africa to America inspired the 2021 Netflix documentary series of the same name—curated the exhibition with the knowledge and input of an advisory committee of over 30 visionaries within the Black American culinary landscape, including Michael Twitty (James Beard Award-winning author of The Cooking Gene), Nicole Taylor (author of the Up South Cookbook), and Adrian Miller (James Beard Award-winning author of Soul Food: The Surprising Story of an American Cuisine). (See full list of exhibition advisors here.)

The centerpiece of the exhibition, the Legacy Quilt—illustrated by Adrian Franks, sewn by the quilting collective Harlem Needle Arts using period-appropriate fabrics, and featuring blurbs on each block by writer Osayi Endolyn—depicts, through traditions stitched together and interconnected across the Diaspora, space, and time, a selection of hundreds among countless stories that deserve recognition. This awe-inspiring artifact stands 14 feet tall and nearly 28 feet wide. The Legacy Quilt also includes an interactive, virtual experience whereby people can submit their own stories of African American culinary heroes to add—emphasizing that these culinary histories are not finite, that the work of documenting and celebrating them is ongoing.

Visitors are then carried through four centuries of influence on agriculture, culinary arts, brewing and distilling, and commerce. The movement of people—whether enslaved Africans across the Atlantic or over six million Black Americans from the South to the North during the Great Migration—and in turn, their food traditions across place and time, is a central theme of the exhibition.

While the Legacy Quilt offers a breathtaking panorama, the Ebony Magazine Test Kitchen—saved from wreckage thanks to preservationists Landmarks Illinois and accessible to the public for the first time in history —offers immersion into a specific institution (and its vivid, Afro-Modernist aesthetic representation of its historic moment) that served as a culinary touchstone for more than two generations of African Americans. Described by The Chicago Tribune as “the most distinctive test kitchen ever created,” it was the site where recipes from Ebony food editors—from oyster gumbo to sweet potato pudding—came together for the iconic “A Date With A Dish” column. The multisensory experience features a soul-stirring soundtrack curated by musician, farmer,  and chef Kelis, and video interviews with former Ebony food editors.

Another central element is a dynamic digital interactive project that uses iconic dishes to unlock informative, animated maps. This feature replicates a dinner table, and by moving around silverware, cups, and even the food, users unlock stories about migration, cultural evolution, and the feeling of sharing a meal with friends and family.

Summoning the complexities and movements, struggles and joys of these culinary histories through food, the exhibition also features to-go shoebox lunches (available for an additional fee)—recalling the meals African American train travelers packed in shoeboxes during the Great Migration, as they were often refused service. These tastings are developed by renowned chefs such as Carla Hall, Adrienne Cheatham, and Kwame Onwuachi, all advisors on the exhibition.

“MOFAD produces exhibitions and other public programs that help people to better access their own history and the histories of the people around them as manifested through food and drink. We are committed to collaborating with fellow New York City cultural institutions to give exposure to stories that may have been underappreciated, untold, or erased in the sweep of history and the narrow narratives that dominate it—and to sharing these vital legacies in new and profound ways,” said MOFAD President Nazli Parvizi. “This large-scale, first-of-its-kind exhibition delves into the many ways African Americans have shaped the American culinary experience. So much of what we grow and how we grow it, and what we eat and how we eat it, derives from these invaluable contributions. We are thrilled, after a two-year pause, to see the full scope of this project come together.”

“In every corner of the globe, African customs have permeated societies, often in unknown or unacknowledged ways,” said Uzodinma Iweala, CEO of The Africa Center. “We are excited that African/American will premiere at The Africa Center, and that visitors will engage with the many African food traditions found in American cuisine in Harlem, the place known around the world for the vibrancy, rich flavors, and dynamism of the African American cultural experience.”

About Jessica B. Harris

Dr. Jessica B. Harris is widely considered the world’s preeminent expert on the foods of the African Diaspora. Dr. Harris is the author of 12 critically acclaimed books and was recently inducted into the James Beard Foundation’s Hall of Fame. In 2012, the Smithsonian’s National Museum of African American History and Culture engaged Dr. Harris to conceptualize and curate the museum’s cafeteria.

Following a 50-year teaching career at CUNY Queens College, and building on over four decades of work as an acclaimed journalist, African/American is a natural extension of Dr. Harris’s life’s work. As Dr. Scott Barton writes, “Dr. Jessica B. Harris has championed the heretofore invisible African American/African culinarians, rendering them visible and in plain sight.”

The Museum of Food and Drink (MOFAD) is a 501(c)(3) nonprofit that is launching the world’s first large-scale food museum with exhibits you can eat. MOFAD believes that food is culture. As the most universal aspect of human existence, it is a powerful lens for understanding ourselves, each other, and the world around us. MOFAD is a new kind of museum that uses this power to create cultural change toward a more thoughtful, equitable, and delicious future.

About The Africa Center

The Africa Center is transforming the world’s understanding of Africa, its Diaspora and the role of people of African descent in the world. Serving as the hub for the exchange of ideas around culture, business and policy as related to the continent, and in the spirit of collaboration and engagement with individuals and institutions who share the Center’s values, The Africa Center inspires enthusiasm, advances thought and action around Africa’s global influence and impact on our collective futures. The Africa Center’s physical presence on Fifth Avenue at the intersection of Harlem and the Museum Mile embodies the dynamism and diversity of Africa and its Diaspora in the heart of New York City. Learn more by visiting www.theafricacenter.org.